We're excited to share that we were recently featured in a USA Today article! 3 Steps to Help You Get Out of Debt, was written by Ingrid Case and discusses how older American's can create a successful game plan to get out of debt before retiring. Our President, Mychal Eagleson, was featured in the article and had a great conversation with Ingrid discussing credit cards, student loans, and medical debt and was quoted in the article, specifically speaking to the problem that's caused when medical debt is turned over to collections agencies. A big thank you to Ingrid for including us in this piece!

This is Mychal's second time being quoted in the AARP Bulletin. You can find the first AARP Bulletin article he was quoted in here: Your Secret Retirement Investment.

"For Gail and Tony Dean, the crisis came as they approached 50. Living in South Florida, they decided to move north, near Orlando, where they bought land and began to build their dream home. Then the debts piled up.

The couple — she worked for Disney, he was in law enforcement — had a construction loan for their new place. The tenant whose rent was covering the mortgage on their old home skipped out. They also carried a second mortgage on the old place, a car loan and credit card debt. In all, they owed more than $250,000.

"It was horrible,” says Gail, now 69. “We were drowning and couldn't find our way out."

Tales like the Deans’ are increasingly common. The share of households led by older Americans that carry debt has risen steadily over the past two decades. The problem is especially bad for households led by people 75 and older. In 1989, 21 percent of these households owed money; by 2016, half of them did. The amount of debt has gone up, too, even after adjusting for inflation.

That's clear to groups that counsel debtors. “It used to be that we had a younger demographic, but we've seen it shift to include older people over the last few years,” says Melinda Opperman, executive vice president of Credit.org, a nonprofit debt-management and budgeting organization in Riverside, Calif.

Debt can be more manageable for young adults looking forward to long careers and rising incomes. Older Americans have less time and earnings power, but still can lighten the burdens of multiple loans.

The Deans, for example, cut their spending, directed bonuses and tax refunds to their debts, and sold their old home. By the time they hit their 60s, all they owed was the mortgage on their new place, now down to a $75,000 balance.

"The weight of the world was taken off our shoulders,” Gail says.

Massive debt can feel paralyzing. But inaction is a bad idea, Opperman says. Based on input from counselors and advisers who have worked with debtors, here are some effective moves you can make.

Start with the obvious: You can't lower debt if you keep adding to it. So don't let your debts increase any further. One proven tactic is putting your credit cards on ice —literally. 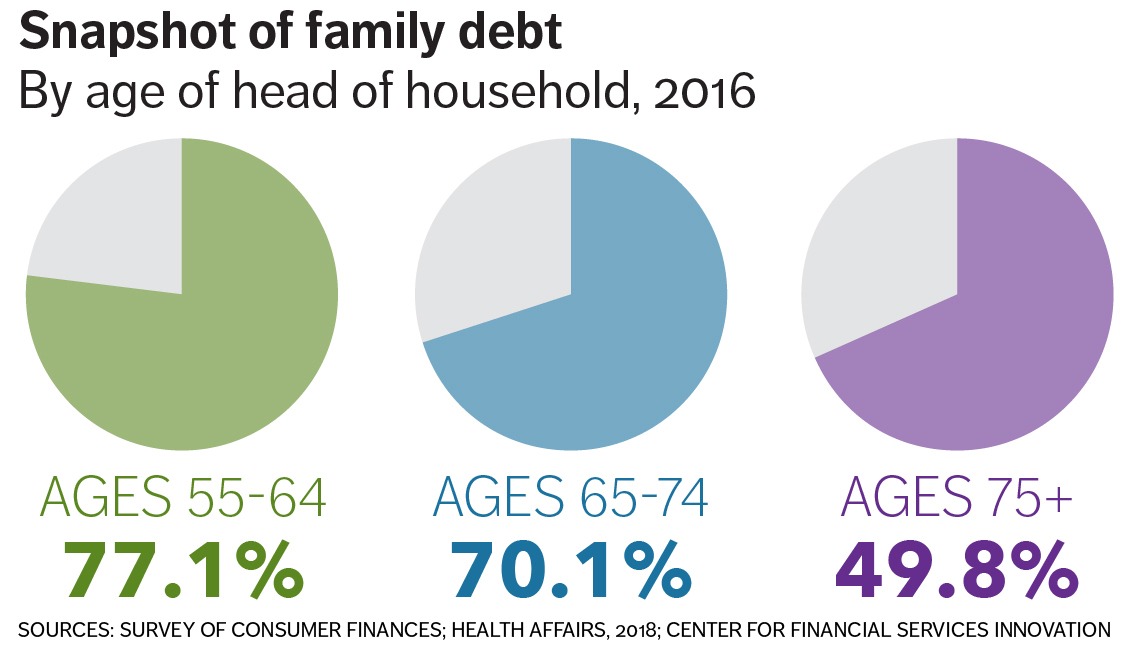 Take any cards out of your wallet or purse, put them in a cup of water and stick them in the freezer. The hassle of pulling out this block of ice later on, and thawing it, can help put the brakes on using plastic for an impulse purchase.

Do a lot of online shopping? Visit your go-to sites and delete any credit card or other payment method on file. (No more one-click ordering!) Don't commit to taking on a larger debt, like a car payment, until you have remedied your situation.

Next, look at your finances to see how much money is going out each month and how much is coming in. To do that, sit down with a pad of paper or a blank document on your computer to tally it all up.

"We've had people print out 12 months of bank account statements to figure out where the money is going,” says David Bizé, a financial planner with First Allied Securities in Oklahoma City. Alternatively, use a smartphone app like Mint to track your spending — or use the low-tech option suggested by Opperman: Carry around a small notebook and write down every purchase.

If your cash outflow exceeds your inflow, you now see exactly how much spending you need to cut — or how much more income you need. Going out to eat or drink less often is an easy place to start. Some other ideas:

Your goals for repayment are simple. You want to satisfy creditors, minimize the interest you pay and retire each debt, one by one. 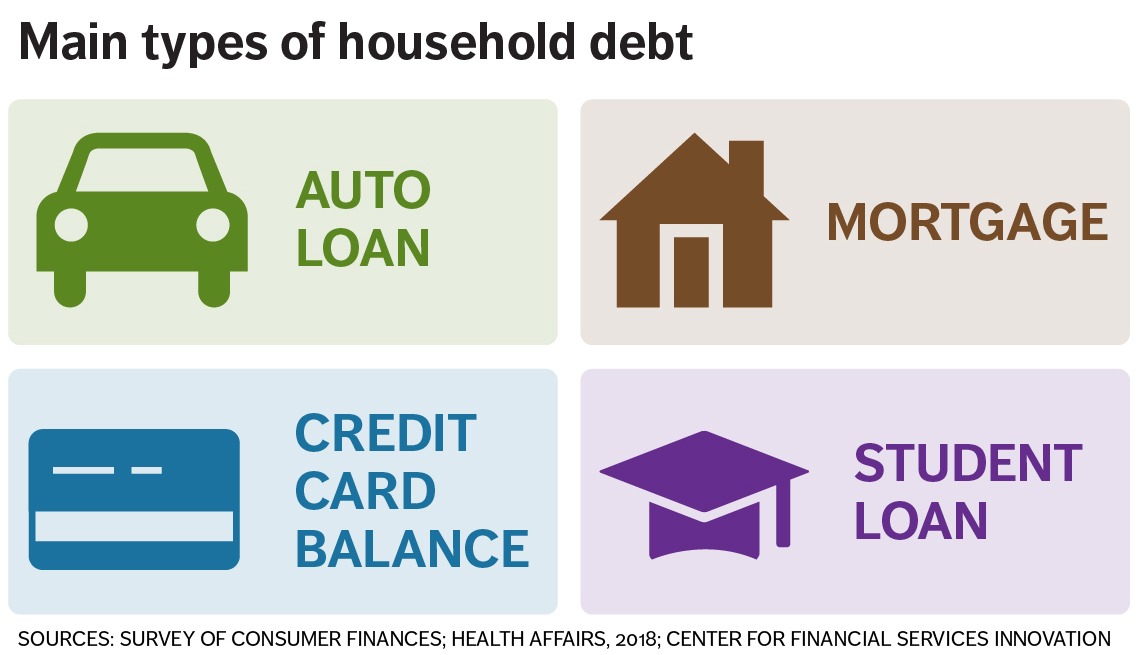 Keeping creditors happy is key: Once you default on a loan, the trouble begins. You can lose a car to repossession or a house to foreclosure; you might also face legal consequences. So calculate the cash you'll need each month to make the minimum payment on each of your debts. With that number, you can build a plan (using the previously mentioned tactics) to free up enough cash each month to keep each debt in good standing.

Next, focus on credit cards, since they have the highest interest rates by far — around 18 percent nationally, compared with about 5 percent for car loans. Experts often suggest one of two methods for reducing card debt when you carry balances on more than one card:

Whichever method you choose, automate your payments. “When you forget to pay a bill, the late payment is outrageous, plus you're paying extra interest,” Opperman says.

Step 3: Work on the Rest

If you have an auto loan, rethink your transportation needs. If your car is worth more than the loan, consider selling it and buying a lower-cost used car with the proceeds. You'll remove one of your monthly debt obligations, and your insurance costs will drop, too. 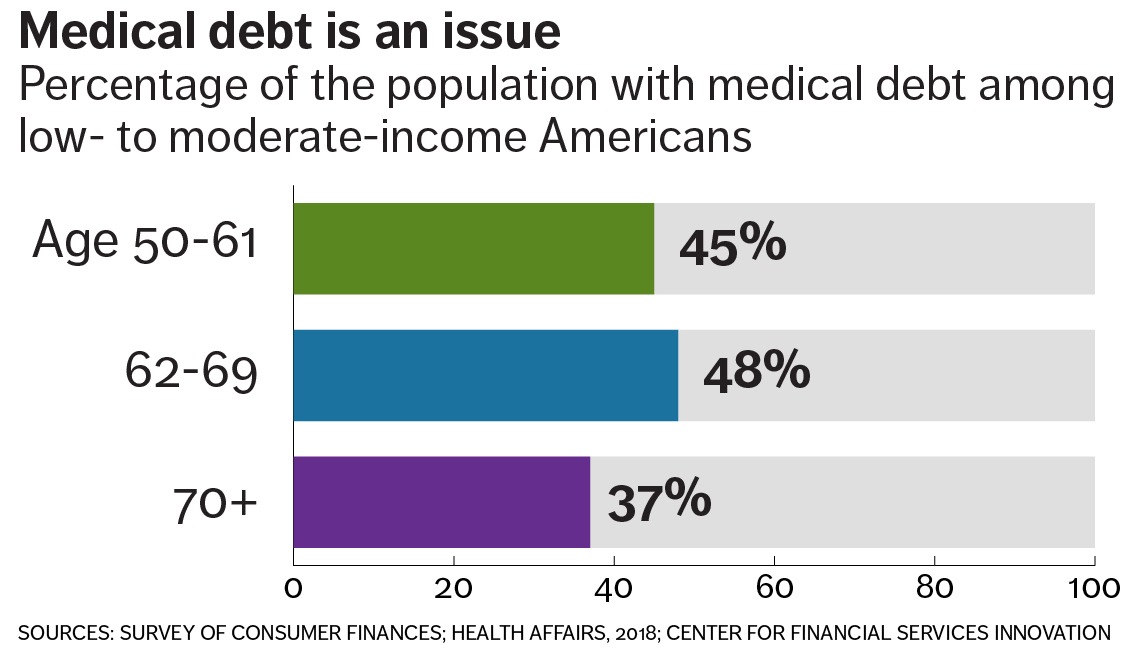 Don't sign a car lease, since that's a monthly payment you can't shed. “If you just roll one lease into the next,” Opperman says, “you'll never own free and clear."

Finally, consider just getting rid of a car. With the growing availability of ride-hailing apps and hourly car rentals, this won't necessarily be a sacrifice.

Now turn to any medical debt you may have. Negotiate payment terms with providers, letting them know about the challenges you face. Make it clear that you want to make good on your debt, but you need time.

Investigate the charity and financial-hardship care offered by many hospitals. Medical debt rarely carries interest payments, but it gets handed over to collection agencies relatively quickly. It's much harder to get a bill reduced after it goes into collection, says Mychal Eagleson, a financial planner at An Exceptional Life Financial in Indianapolis.

Next up is student loans. If yours are federally backed, you probably have a low interest rate. Make regular payments until you've paid off your higher-rate debt. Investigate loan consolidation, which can lower both your rate and your monthly payments.

What if all the corner cutting, negotiating and strategizing doesn’t help? You might work with a credit counseling agency, which can consolidate and reduce your monthly card payments. Avoid for-profit counselors asking for upfront fees; look for ones belonging to the National Foundation for Credit Counseling or the Financial Counseling Association of America.

Bankruptcy is your last resort. An attorney can help you explore the difference between Chapter 7 bankruptcy, which can free you from many impossible debts, and Chapter 13, which can help you set up a workable payment plan. A Chapter 13 bankruptcy stays on your credit record for seven years; a Chapter 7 filing, 10 years. Any loans you can get during that time will be expensive. But that might be the price you pay for a fresh start."

This article was written by Ingrid Case and originally published by AARP Bulletin here.

Are you trying to figure out the best way to get out of debt while building the retirement you've always dreamed of? Don't hesitate to reach out to us. We help our clients with planning that provides practical answers to questions like this and much more.